Unfortunately for my eyes, I watched every second of last night’s National Championship Game, the culmination of the 2017 edition of the NCAA Basketball Tournament. Before I get into my three main takes from last night, I should probably congratulate the scrappy upstarts from the University of North Carolina for bringing some rare glory to their small-time basketball program. For the vast majority of this season they were the best team, and the best team doesn’t always win the NCAA Tournament. In fact, you could easily say Gonzaga was the second best team all year, and it’s even rarer for the two best teams to meet for the championship. So I have no issue with a UNC win (even though I was rooting for the Zags). But that game was very very very bad.

One of the happiest nights of my life was April 4th, 2011. It was eight months into my freshman year at the University of Connecticut, and the men’s basketball team defeated Butler to win the National Championship. I can still remember the pure joy, the unadulterated ecstasy. I could take pride in my school, in my team, and (for just about the last time) my life choices. That night was even the first time I saw a car get flipped over. That’s an important time in a man’s life, and for years, everyone else just took a giant dump on it because the game was “low scoring,” and “ugly,” and “unwatchable,” and “the worst championship game ever.” Well, thanks to the gift and curse that is the modern social media news cycle, I can officially enjoy that memory again because no one will remember how shitty that game was after watching last night’s abomination. The first half was perfectly fine. It had a good pace, people were making (some) shots, the game had legitimate flow. But then the second half happened. Every two seconds a foul was called. Gonzaga’s entire front line was in foul trouble within the first five minutes of real time after halftime. Everything needed to be reviewed and every possession needed to have some kind of stoppage. I lost count of how many dumb turnover’s both teams committed. I think they combined to miss 11 straight shots or something. Gonzaga went like seven minutes without a basket. It was the most disjointed, poorly played, hideous basketball I’ve seen in some time. Bill Raftery was running out of breath calling every single shot short. It was a legitimately horrible game. And I loved it. It reminded me of a Tuesday night MAC football game or a 49ers-Rams game. It became so bad and so ugly that only the true diehards (or anyone with money on the game) were left to enjoy it. I thrive on bad basketball. Give me all the long contested 2s, all the boneheaded turnovers, all the relentless fouls and bad replay decisions. It gets my blood pumping. It keeps me grounded for when I watch Warriors or Nuggets games. I like knowing that for every artistically beautiful and aesthetically pleasing game, there’s an inverse game out there. It makes me feel better about my own subpar game when I see elite athletes and people who have trained their whole lives for this play like they’ve never heard the word basketball before. So I’m being totally sincere when I thank all the players, coaches, and officials involved in last night’s game. Much like almost everything else I enjoy, it was horrible for my health, but I was happy.

My second take is that, if I was an NBA executive, I immediately remove every single player that entered the game last night from my draft board ASAP. Justin Jackson STUNK. He played decent D but was looking like Lavar Ball at the Y on offense. Przemek Karnowski missed at least nine layups. For a five minute stretch in the second half, Gonzaga’s offense was walk the ball down the floor, dribble for a few seconds, dump it down to Karnowski, have him back down a few steps, turn, and miss a layup. It was like clockwork. Kennedy Meeks, I mean I don’t care what year it is, what country they’re from, how big they are, whatever. Gonzaga’s front line is all white guys, and you get seven points? Huge red flag. Zach Collins might have been the most talented player on the court, but I’ve never seen someone play dumber with their fouls. He picked up his third early in the second half then started throwing elbows and hacking people like he was Rick Mahorn. Use your head, dude. You’re the best player on the team, maybe you don’t need to be super aggressive on defense when you have four fouls with like 15 minutes left. The only guys I might take in the second round are Joel Berry II and Nigel Williams-Goss, because at least they showed heart and basic decision making ability. I know this game didn’t feature any of the top-end prospects, but even still it wasn’t a good night for anyone’s NBA future.

Lastly, and maybe most importantly, what the hell was Gonzaga doing wearing alternate uniforms for the National Championship game? Who do they think they are? It worked for the Cavs, but that’s because they have LeBron. It worked for the Cubs because they were playing another sad sack franchise. But Gonzaga is Gonzaga. They’re nothing. They’ve never won anything. And they think they can pull off some kind of uniform high-wire act that only the best player in the NBA can pull off? Against North Carolina? I mean look at these: 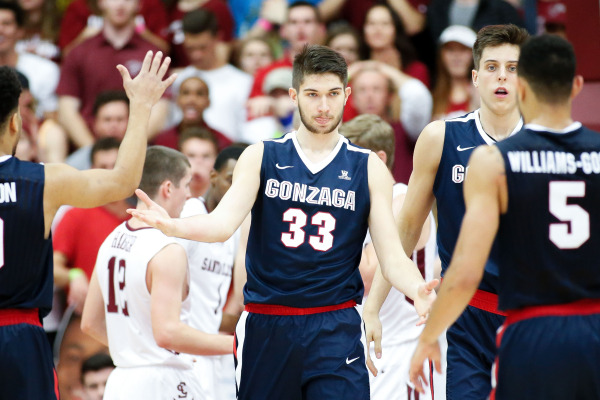 Which one of those says “I’m ready to finally take my place among the elites of college basketball,” and which one says “I’m about to play the worst game of all time?” When you search Gonzaga black jerseys, an article about them possibly being cursed is the first result. Cursed! And you’re going to wear them for the most important game in the history of your program? Are you kidding? Can you imagine if an NFL team wore an alternate jersey in the Super Bowl? I’m still convinced Bill Belichick wearing a different color hoodie was directly responsible for the Patriots losing Super Bowl 42. If I’m a Gonzaga fan I don’t think I would ever let this go. You had the National Championship, the ultimate achievement in your sport, in your grasp, and you decide to wear your black alternates. Smh, Gonzaga, smh.