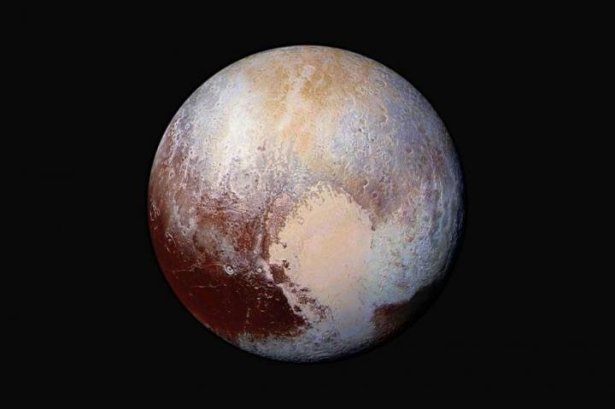 source– The reason Pluto lost its planet status is not valid, according to new research from the University of Central Florida in Orlando.

In 2006, the International Astronomical Union, a global group of astronomy experts, established a definition of a planet that required it to “clear” its orbit, or in other words, be the largest gravitational force in its orbit.

Since Neptune’s gravity influences its neighboring planet Pluto, and Pluto shares its orbit with frozen gases and objects in the Kuiper belt, that meant Pluto was out of planet status. However, in a new study published online Wednesday in the journal Icarus, UCF planetary scientist Philip Metzger, who is with the university’s Florida Space Institute, reported that this standard for classifying planets is not supported in the research literature.

Metzger, who is lead author on the study, reviewed scientific literature from the past 200 years and found only one publication—from 1802—that used the clearing-orbit requirement to classify planets, and it was based on since-disproven reasoning.

He said moons such as Saturn’s Titan and Jupiter’s Europa have been routinely called planets by planetary scientists since the time of Galileo.

“The IAU definition would say that the fundamental object of planetary science, the planet, is supposed to be a defined on the basis of a concept that nobody uses in their research,” Metzger said. “And it would leave out the second-most complex, interesting planet in our solar system.””We now have a list of well over 100 recent examples of planetary scientists using the word planet in a way that violates the IAU definition, but they are doing it because it’s functionally useful,” he said.”It’s a sloppy definition,” Metzger said of the IAU’s definition. “They didn’t say what they meant by clearing their orbit. If you take that literally, then there are no planets, because no planet clears its orbit.”

The planetary scientist said that the literature review showed that the real division between planets and other celestial bodies, such as asteroids, occurred in the early 1950s when Gerard Kuiper published a paper that made the distinction based on how they were formed

Study co-author Kirby Runyon, with Johns Hopkins University Applied Physics Laboratory in Laurel, Maryland, said the IAU’s definition was erroneous since the literature review showed that clearing orbit is not a standard that is used for distinguishing asteroids from planets, as the IAU claimed when crafting the 2006 definition of planets.

“We showed that this is a false historical claim,” Runyon said. “It is therefore fallacious to apply the same reasoning to Pluto,” he said.Metzger said that the definition of a planet should be based on its intrinsic properties, rather than ones that can change, such as the dynamics of a planet’s orbit.”Dynamics are not constant, they are constantly changing,” Metzger said. “So, they are not the fundamental description of a body, they are just the occupation of a body at a current era.”

Instead, Metzger recommends classifying a planet based on if it is large enough that its gravity allows it to become spherical in shape.

As much as it pains me to do so, I’ve got to make a pretty big admission: the Patriots’ win in Super Bowl LI is no longer the greatest comeback of all time. Pluto clawing its way back from the depths of irrelevancy to reclaim its rightful place among the Milky Way planets is as inspirational of a tale as these ears have ever heard. I still remember hearing Pluto was no longer a planet for the first time, and I can confidently say it scarred me for life. Everything I thought I knew until then was just a lie. I became more cynical. Jaded, even. How could I trust the information I was given ever again? I mean, hell, assuming Pluto becomes a canon planet again, there’s gonna be an entire generation of kids asking the same thing. They’re all so sheltered and self-absorbed they probably don’t even know what Pluto is, and now it’s going to be a planet again? That is, if they even still teach the planets anymore. Learning about space might damage their belief that they’re the center of the universe (sorry, I’m trying to improve my readership among 50-80 year olds, and I figure bashing the youth is a good way to do it).

This just tells me we still don’t know anything about space and we never really will. I’m fine with it, honestly. Ignorance usually makes me want to jump into oncoming traffic, but every time I think about space it feels like my brain’s going to explode. Space gets compared to the ocean a lot, but humans don’t die within a millisecond of being exposed to salt water, so I’m cool not having a real deep pool of space intel. But this study people used to discredit Pluto is over 200 years old and everyone’s still cool with it being used for major scientific purposes. Not only that, it took them 200 years to realize it might apply to Pluto! Then it took this random UCF scientist over a decade to realize that it actually didn’t apply to Pluto and that THE ORIGINAL STUDY WAS OVER 200 YEARS OLD SO MAYBE DON’T USE IT ANYMORE! I swear there’s an annual conference where all the NASA guys get together and come up with what they’re going to make Neil deGrasse Tyson say about space that year. Because if you ask any scientist besides NDT about nebulas or dark matter or singularities they just shrug their shoulders and say “I don’t know, man. You tell me.” NASA’s got the easiest job, ever. Release one statement a year saying you found literally anything and everyone will say how much more funding you need. Sign me up for that! This just in, Brian has recently discovered that Uranus is actually made of an edible material called salada. $100 billion, please. That’s how easy being a space researcher is, because no one knows anything and no one can possibly fact check you.

But anyway, welcome back, Pluto. Feels good to have nine planets again.