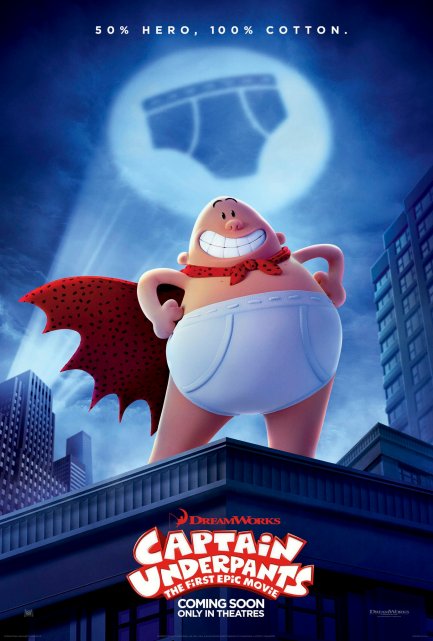 Maybe I’m just not watching the right channels, but somehow this isn’t the biggest news in the entire world. The Captain Underpants movie comes out today. This is the biggest movie since John Wick 2 and I haven’t been beaten over the head with a relentless add campaign. Classic media, only showing you what they want you to see. Whatever, more room in the theater for me.

I think it’s safe to say I wouldn’t be who I am today without Captain Underpants. I loved everything about the stories. I still do, really. I just identified with George and Harold (mostly Harold, since he’s white). Growing up, I read the Harry Potter books an infinite amount of times. Well, I read the Captain Underpants books more than that. Captain Underpants is more than just a brilliant character and book series. It represents a way of life. To be who you really are deep down inside. To live without shame. To fight for truth, justice, and all that is pre-shrunk and cottony. The books and illustrations were so good I didn’t even think there needed to be a movie. But now that there is one? I’m jacked up. I’m ready to run through a brick wall. I’m gonna be hootin’ and hollerin’ in the theater like it’s the Comedy Night at the Apollo. I’m ready for Action. I’m ready for Thrills. And I’m ready for Laffs. I’m almost hesitant to give a review on it since I’m so biased, but I lack any journalistic integrity, so it’s all good. And let’s be honest. The source material is so good, it’s impossible for this movie to be bad. Hopefully this introduces a new generation to the wonderful exploits of Mr. Krupp, the bravest man who ever lived. I feel like the Patriots just won the Super Bowl again.