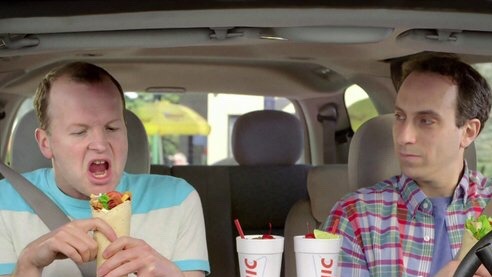 Think of the greatest entertainment duos to ever grace the Earth: Abbott and Costello. Penn and Teller. Mike and the Mad Dog. All of them changed the show business game, and all of them absolutely despised each other. The same can undoubtedly be said about the Sonic Guys.

I don’t know why I thought of this the other night, but I did. Yet another Sonic commercial came on, and one of my friends asked if I thought they liked each other in real life. At first, I didn’t really have an answer. After all, how should I know if they like each other? I don’t know them, I don’t know their lives. But then it never left my mind. Like a bit of popcorn stuck in your teeth, the thought got lodged in my brain and started to fester. I went deep into Sonic Guy lore. I learned the complex cannon inside and out. And the more I watched, the more it became clear: these two would murder each other if they could get away with it. I mean, watch some of these:

I don’t know how you could film these and remain civil. If I had to do a million takes of one of these commercials once I don’t think I would ever speak to my co-star ever again. And these guys have been doing this for YEARS. Wikipedia says they’ve been together since 2004. 13 years of doing commercials together. Just the two of them every time. Every 30 second spot is a two-man play. How the dark-haired straight man hasn’t snapped and called out the other guy for all his stupid antics and bullshit is beyond me. How the lighter-haired one hasn’t tried to forcefully remove the stick out of the other guy’s ass is incomprehensible. If the next ad doesn’t have them coming to blows I might think about boycotting Sonic (not really). I’ve never seen a pair with more built up tension. They need some release. They need to brawl. They need to kiss. They need to do whatever it takes to relieve some of this stress they have built up. I’m actually worried about their mental health. Sonic is torturing these guys by continuing to force them to work together. Sure, they probably have gotten millions of dollars out of it, but at what cost? How much of themselves have they thrown away in pursuit of fame? Sonic has been there every step of the way, whispering sweet nothings in their ears and enabling this self-destructive behavior. They’ve turned two star-crazed men into angry, sexually frustrated zombies, all to sell a few more delicious burgers and tater tots. For shame, Sonic, for shame.