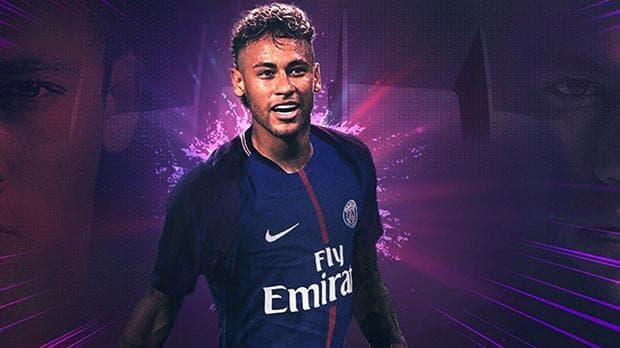 source- Neymar said he followed his "heart" after sealing his €222 million move to Paris Saint-Germain from Barcelona.

Neymar became the world's most expensive player after PSG opted to trigger his buyout clause and told reporters at his unveiling on Friday: "My heart told me that it was time to sign for Paris Saint-Germain."

The 25-year-old enjoyed a successful four-year spell with Barcelona, winning one Champions League title, two La Liga titles and three Copas del Rey as well as one FIFA Club World Cup and one Spanish Super Cup, but he said he was relishing the new challenge.

A source has told ESPN FC that Neymar will be paid around €30m per year after taxes and has been handed a major signing bonus in excess of his net annual sum.

$260 million. Let that sink in. $260 million for one player. The previous record was $123 million. Absolutely mind bending number. After weeks and weeks of leaks, foreplay, non-commitment, denial, and accusations of tampering, Barcelona finally sold Neymar to Paris Saint-Germain for $260 million (or €222 million for the very few non-American fútbol fans out there). From PSG's standpoint, why the hell not? They've got unlimited funds thanks to that sweet, delicious oil money, and you've go to do something to shake off the "perennial Champions League chokers" stink, and not winning the French League last season was probably pretty embarrassing for one of the richest teams in the world. For Barthelona, it's not like they need the money or anything, but it's pretty hard to turn down $260 million for one guy regardless of how good they are, especially if the player seems pretty determined to leave. Hurts to lose someone of Neymar's caliber, but something tells me they'll be okay in the long run.

It's pretty hard to miss the obvious parallels between this and the Kyrie Irving situation in Cleveland. Neymar is better at soccer than Kyrie is at basketball, but the fact remains: supremely talented individual on a team with an even more supremely talented individual that has had success and won wants to move out of the shadow of the transcendent mega-star and prove they can do it on their own. I mean, if you're Neymar, I don't really see the downside, here. You know that, as long as he's still playing (and probably long after he retires), Messi will always be king. Everything will always be compared to Messi, and even if you someone elevate your game to the alien plane of existence Messi occupied, he's so beloved you'll never measure up. Why would you even bother? You've already won every trophy there is to win at Barcelona, go to the French League, score 50 goals a season, win the league every year, make $35 million or whatever it is a year, and just have fun. I have zero issue with it, just like I have zero issue with Kyrie wanting his own squad. I don't really have my finger on the pulse of the Spanish media market, but if they operate like the NBA fans here, I'm sure Neymar's getting roasted left and right. "Where's the loyalty?" "Why would you want to leave Barcelona?" He's just doing it for money/stats!" It's just so stupid. So you're not allowed to choose to join a "super team," but now you're not allowed to leave, either? What? As I've said countless times before, players are people, too. They're allowed to make decisions. And Neymar decided he didn't want to come in second to Messi for the rest of his life. He wanted to prove he could carry a team as The Guy. Since when is that something we frown on?