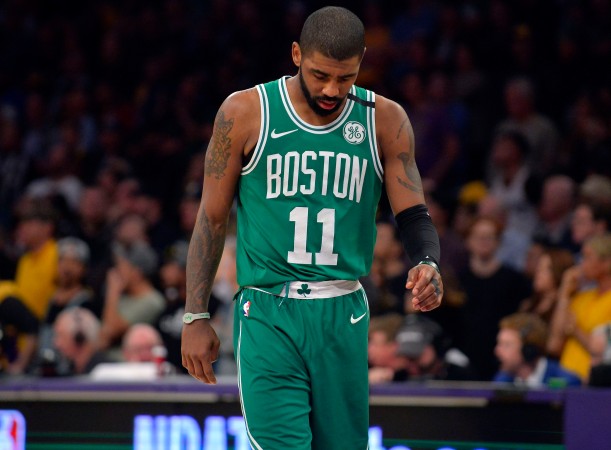 source– In the aftermath of left knee surgery, All-Star point guard Kyrie Irving of the Boston Celtics will miss the rest of the regular season and playoffs, the team announced.

Irving will undergo another procedure on Saturday to remove two screws from his patella that were inserted in 2015 to repair a fracture he suffered in that year’s NBA Finals. The team said a bacterial infection was discovered at the site of the screws when Irving had his most recent surgery, on March 24, to remove tension wire in the knee and that Saturday’s procedure will ensure no infection remains in the knee. The wire had been placed in his knee during the same surgery in which the screws were inserted in 2015.

In all honesty, I’m not upset about this at all. Quite the opposite, in fact. I don’t have any personal experience, but I’ve heard having screws in your knees is not ideal. As long as this doesn’t become a Derrick Rose saga (and there’s absolutely nothing to suggest it will), Kyrie should take all the time he needs to come back 100%.

Listen, Kyrie is the franchise. The Celtics can only go as far as he takes them. So, yes, him going down effectively kills any and all playoff hopes they had. I hate to break it to the more optimistic Celtics fans out there, but the C’s were never winning the title this year. Even if they miraculously win the East, they’re winning max one game in the Finals. Once Gordon Hayward went down a millisecond into the season, it was always about next season. Barring a shock LeBron-to-Philadelphia move, the Celtics should be the early favorite to win the East next year. I’m totally fine just focusing on that.

Use these playoffs to get Jaylen Brown and Jayson Tatum some high-pressure experience. Let Terry Rozier keep developing, rendering Marcus Smart redundant (depending on his price tag). Now that Kyrie’s gone, there’s really no non-injury related worst case scenario for the playoffs. It’ll stink if they lose first round, but they didn’t have their best player, what were they supposed to do? If they win a series, it’s just a nice bonus shot of confidence going into next season. Not that he could possibly improve his standing after everything he’s done this year, but if the Celtics have any success it’s time to ask whether Brad Stevens is legitimately the best coach in the league. Maybe the best coach of all time. If he can get Abdel Nader into the second round of the playoffs, it’s time to put him in the Hall of Fame.

So next year the Celtics have Kyrie, Hayward, Horford, another summer of development for Jaylen, Tatum, and Rozier, and the Kings’ first round pick. Yes, please.

One thought on “Kyrie Irving Out for the Year”