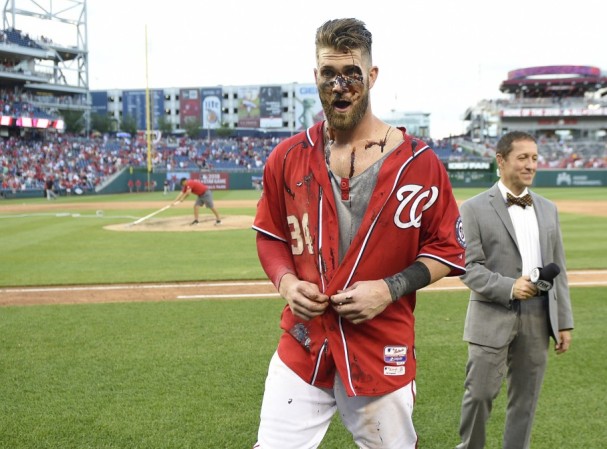 So this bubbled up over the weekend. I don’t even know how widespread it was, but, because I’m a masochist, I wound up reading/watching all the think pieces that came out of Bill James, godfather of sabermetrics, and, ironically, old man yelling at clouds, said that Bryce Harper, yes, that Bryce Harper was not a superstar.

Thank you all for participating in my poll about how many superstars there are now in baseball. Consensus answer was about Seven. Amazed at how many people think of Bryce Harper as a superstar. To me, he is nowhere NEAR that standard.

Bryce Harper is the dictionary definition of a superstar. Because MLB marketing is inept andMike Trout has the personality of a cardboard box, he’s probably the most famous player in the MLB. He’s the most entertaining player (whether you love him or hate him) in the league. He blasts million-foot home runs. He’s got an OPS over 1.000 despite pitchers breaking their backs not to give him anything to hit. He’s got a trillion dollar contract with Under Armour and his own signature shoe. If he’s not a superstar no one is.

Listen I hate these terrible “Is Joe Flacco Elite?” debates. I think they’re stupid and boring and pointless. If you’re having a legitimate debate if someone is a superstar or not (I refuse to believe this Bryce Harper “debate” was anything approaching legitimate), then they’re probably not a superstar. My superstar criteria are pretty simple: Are you 1. a top-ten player in the league? Are you 2. famous enough to have name recognition among the most casual of casual fans? Have you been 3. the best player on multiple championship teams? If you check boxes one or two, you’re probably a superstar. If you add in box 3, you’re definitely a superstar. Bryce Harper is a top-ten player and really famous. Easy.

Even though I hate these debates I feel obligated to give my own list of the current baseball superstars. It pained me not to include Joey Votto, who somehow is the least famous athlete ever despite being one of the best 10-20 pure hitters in the history of baseball:

That’s it. Those are the baseball players with enough talent and name recognition to be called superstars. It wasn’t that hard to come up with the list. When I couldn’t think of any more, that was a pretty clear sign that it was time to stop. Sports aren’t nearly as complicated as we make them out to be. Bryce Harper is a superstar. Take your molten lava takes somewhere else.

One thought on “The “Is Bryce Harper a Superstar?” Debate is the Fakest, Most Contrived Talking Point in History”