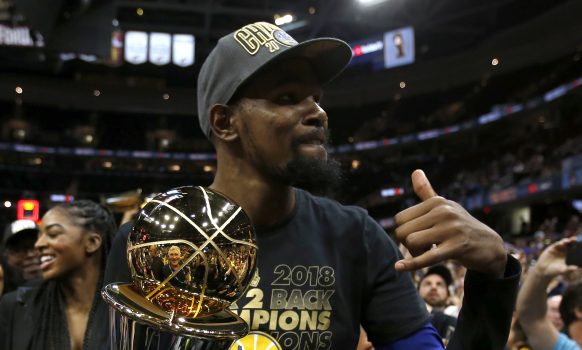 So the Warriors won the title. Quite possibly the least climactic championship game/series in my lifetime. Total domination. Makes me sick. Sick league, guys. God, the NBA is such a joke. Why should any team ever play another game if they know the Warriors are just going to win in the end. I think I’m speaking for everyone when I demand the NBA put an asterisk next to these last two Warriors titles because they’re too much better than everyone. This would never happen in hockey.

Hey, Kevin Durant. Congrats, guy. You just became the first person to ever win two championships while also winning zero. Must feel great. Imagine a grown man deciding to take autonomy of his professional career? Imagine choosing not to play with Russell Westbrook anymore? God, this sham league was ruined the second he chose to use his legal right as a free agent to sign with whatever team he chose. Can you imagine a hockey player deciding his own personal happiness and quality of life was more important than some bullshit idea of “loyalty,” even though the Thunder would have just kicked him to the curb the second he wasn’t bringing a satisfying ROI? Just makes my blood boil. And signing with a 73 win team? Or any team that had previously won a championship, regardless of how long ago? Couldn’t be me. There’s no such thing as a viable free agency destination because real men stay with the teams that drafted them for their entire careers regardless of if they like it or not, but if there were viable free agency destinations, the only legitimate ones would be Brooklyn, Memphis, Toronto, Indiana, Charlotte, Orlando, Atlanta, Utah, Denver, Minnesota, Phoenix, New Orleans, Oklahoma City, or the Clippers. It’s called making your own legacy, not riding the backs of other, less talented players. Can’t believe a star would leave in free agency. Guys like LeBron or Shaq would never do such a thing.

Don’t get it twisted, though. This isn’t all on KD. The rest of the Warriors are to blamed for ruining the league, too. First of all, Larry Riley needs to be executed. He’s the guy that drafted Steph Curry and Klay Thompson. Two guys who like 3s more than layups. While I think all three deserve the death penalty, Riley really needs to go. He’s singlehandedly responsible for ruining this game I love by bringing in the two guys who sparked the 3 point revolution. Every time I see a 3 point attempt, I want to claw my eyes out. THIS GAME IS ABOUT LOW POST BASKETBALL AND PHYSICAL DEFENSE GODDAMMIT!!!!!!!!!!! NOT 3s! What happened to the good old days of 74-61 games where there were no 3s made, no layups allowed, and no fouls called. Everyone’s is so soft these days. Only thinking about 3s. How about you run some team basketball? Maybe a little triangle action? Try having your big guy post up and attempt a bad fadeaway or ugly running hook instead of hunting 3s, playing fast, visually appealing basketball, and taking efficient shots? God, I just hate teams that try new styles to try and maximize their offensive output and take advantage of current defensive strategies. Just bang in the post like MEN and stop worrying about peacocking around after you hit your tenth 3 of the game. Love those Suns teams, though. Nash to Matrix? Couldn’t beat it.

I’m not done with the front office, either. You make smart salary decisions so you have the ability to sign Kevin Durant without gutting your roster? Are you kidding? What are all the bad GMs around the league supposed to do if you’re actually allowed to manage the cap correctly? Old school guys didn’t have this problem, mostly because the players these days are so overpaid. God, if Oscar was making all that money, had access to modern medicine and training techniques, was able to play in today’s game where there’s no hand-checking and you need actual basketball ability, played against this generation of soft, more-talented-than-any-crop-of-players-in-NBA-history-because-people-get-better-at-stuff-the-longer-we-do-them-so-it’s-not-an-insult-it’s-the-natural-progression-of-time players, and was 40 years younger, he’d still be playing today. And what’s up with the core of the roster? Three Hall of Famers through the draft???? What the hell? In my day you had to trade with all the stupid teams to form your SuperTeams. Imagine the Celtics or Lakers having the gall to draft incredibly talented players in non-premium draft positions? Hah. They would never. Red would just fleece some novice GM if he wanted a new star. Real dynasties take advantage of being smarter than anyone else to win.

And don’t get me started on Draymond. The game used to be played with honor and integrity. There were no loudmouthed, right-on-the-edge-of-dirty players when the NBA was great. Guys like Dennis Rodman, Bill Laimbeer, Karl Malone, Bruce Bowen, Charles Oakley, Rick Mahorn, Kevin McHale, Isiah Thomas, Reggie Miller, Gary Payton, and Kevin Garnett would never do something so heinous as kicking someone in the balls. Unlike today’s generation that only cares about their own brands, the real legends were so focused on basketball to even know what the human anatomy was. Today’s players have everything handed to them, and they still want to act dirty. SMH.

LeBron’s not off the hook, either. People forget he started all this SuperTeam nonsense when he joined the Heat. Before that, no one in NBA history had ever had three All Stars on the same team. Him and his Banana Boat Boyz are the driving force behind today’s buddy-buddy NBA culture. Imagine being friends with people in the same line of work as you? Or, even worse, imagine being friends with someone despite the fact that someone you’ll never meet or talk to hates it because, for some bullshit nostalgia-driven reason, thinks that you being friends with that person will make it less entertaining for him to watch you? Who would do that? Michael didn’t need friends. He made other people think they were friends, only to betray their trust and shatter them mentally when it was most convenient for them. That’s the kind of emotional manipulation I want out of my G.O.A.T., not seemingly legitimate friendship that, despite the fact that I find him annoying much of the time, actually makes me think I could get along with him if I met him in real life. Your G.O.A.T. is approachable? Please. You clearly know nothing about basketball. Next you’re going to tell me the greatest player of all time passed the ball to an open man underneath the basket instead of forcing up a contested fadeaway with less than five seconds left in a Finals game or something.

Lastly, if you legitimately agree with any of these takes, please jump off a bridge. The Warriors are probably the greatest team of all time. Deal with it. If you’re so upset, go pretend you hadn’t spent the last ten years crushing Ovechkin for never winning so you can feel better about yourself and leave the NBA to the people that still enjoy it. The Finals stunk, but the league has never been better. If you’re under 35 and disagree, I honestly don’t know if you know what a basketball looks like.

2 thoughts on “How Ruined is the NBA?”