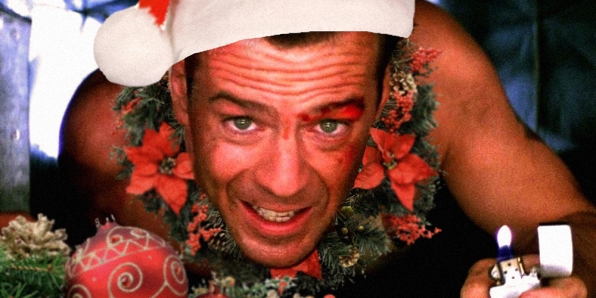 Imagine this scenario, if you will. You’re at a Christmas party. Or any party, or any kind of social gathering. Somehow, the topic of Christmas movies comes up and everyone is saying their favorites. The old guy says It’s a Wonderful Life, the token millennial says Elf, there’s plenty of Rudolph the Red Nose Reindeer. Feeling anxious, you think about what you’re about to say. Tired of living in the shadows, you decide to be zany to get a few laughs and stand out. “Actually, Die Hard is my favorite Christmas movie.” The guy who never goes online gives a chortle, but everyone else, including me, hyper-aware-of-everything-that-goes-on-online-and-is-thus-never-impressed-with-anything guy, rolls their eyes. “Here we go again,” everyone says. “What’s next? He gonna ask if a hot dog is a sandwich?”

The “Die Hard is a Christmas movie” argument has been around for a while, now. I’m pretty sure it was around online when I was in high school. But it’s pretty inescapable, these days. Everyone thinks they’re the most clever, funniest person to ever walk the planet when they proclaim that Die Hard, not whatever your preferred version of A Christmas Carol, is the best Christmas movie. Dish even has Santa saying it in their new commercial. It’s absolutely everywhere. And it’s just so goddamn lame. It’s just another thing that people latch onto to seem cool online. Everyone wants to be part of the in-crowd, and the fastest way to join the smarmy, elitist culture that is the Die Hard Christmas gang is to say things like “Die Hard is my favorite Christmas movie,” “Nickleback sucks,” and “Ben Affleck as Batman is terrible.” And it’s tiring, too. Ever met a Die Hard Christmas Guy? No one has ever felt stronger about anything than they feel about the fact that Die Hard is a Christmas movie. If you say one thing to challenge them, they’ll go to the ends of the earth to show how wrong you are. People who call Die Hard their favorite Christmas movie almost singlehandedly take all the joy out of Christmas.

Before we go any further, I think I need to clarify something: I’m a huge Die Hard fan. I named John McClain as my number one action movie character of all time. Die Hard is the greatest action movie of all time and one of the five most influential movies of all time. 75% of action movies made after Die Hard was just Die Hard with a different skin. It’s one of the most important movies ever made. That’s why I get pissy when people call Die Hard a Christmas movie. It cheapens it. When’s the last time you thought about (forget watched) Christmas Vacation in July? What about The Santa Clause? Jingle All the Way? Christmas movies are so specific to Christmas that they don’t resonate whatsoever if watch them at any other time of year. Christmas is literally the central plot point to every Christmas movie. If it wasn’t Christmas, all the movies you know and love wouldn’t happen. What happens to Die Hard if it doesn’t happen on Christmas? Anything? There would be some hoops to jump through narratively, sure. But the central plot doesn’t change at all. Nakatomi Plaza could have been held up any day that all the top executives were all there. The fact that it was Christmas was only window dressing.

Listen, if you really think calling Die Hard is a great Christmas movie is the highlight of your year, I won’t fight you. If you truly believe Die Hard belongs in the Christmas movie genre, go for it. I’ll judge you and I’ll hate you, but I won’t stop you. Just know that by doing so, you’re ruining the very movie you claim to love. Die Hard is timeless. It shouldn’t be shackled by the Christmas movie label. It’s great no matter what time of year you watch it. It’s great in March. It’s great in September. And yes, it’s great in December. Don’t insult the greatest action movie ever by insinuating that you can only enjoy it during Christmas or that some Christmas message is the main point of the movie. That’s just asinine. Die Hard is about one man waging a guerrilla war against a small group of terrorists and killing a dozen men singlehandedly. That doesn’t sound like Christmas to me.