Going back home to Vermont for the holidays always brings back memories from a life I left behind long ago. The old DVDs, the family photos, the clothes no one’s had the heart to get rid of yet. The archaic gaming systems in particular drum up some of the first takes I ever had about sports. When I got together with my high school friends and we fired up the PS2 and started playing some old NBA games, my mid-2000s NBA takes came flooding back. I couldn’t help myself and just started spewing them out: “If he was in a better system Kelenna Azubuike would have been an All Star.” “Kevin Martin will lead the league in scoring at least five times.” “Stromile Swift is the greatest athlete in pro sports history.” And, of course, “Gilbert Arenas is the best player in the NBA.” I loved Gilbert. He was my favorite player. I had his shoes! These ones here:

I was the biggest Gilbert stan in the world. I put on for Agent Zero like random kids from Iowa put on for Kobe. When it all fell apart for him I was heartbroken. It just seemed so preventable. And when I thought about him a few days ago I told my friends “If Gilbert Arenas’ career started today he’d be a first ballot hall of famer.” We kicked around the idea for a bit, but quickly moved on. And I thought that was that. But then when I watched Isaiah Thomas come back last night (did you know he got traded in the offseason? And that he was unhappy about it? I just found out the other day. Crazy) and play well right away, it brought back the Gilbert thoughts. Isaiah can dominate in today’s game, couldn’t Gilbert? Couldn’t Gilbert have been even better today? Then I knew I had to dive in and make the case that Gilbert Arenas should have been an all time great.

I adjusted the take to “If his career started four years ago” because Gilbert’s short-lived prime started four years into his career. Now, Gilbert’s ascendancy to all star status had a lot of Isaiah-like variables: taken in the second round, traded after showing promise, kind of given up on. For the purpose of this, lets just assume all those things happen again so he has the same backstory and motivation. Anyway, from 2004-2007 he made three straight all star games, putting up 27.7 pts, 5.7 assists, 4.3 rebounds (I take it back. What point guard could be considered elite in 2018 only averaging 4 rebounds a game?), and 2 steals shooting .432/.361/.826. He shot over 7 threes a game in a time when threes were still considered poison. He got to the line over 9 times a game in a time where the only thing considered a foul was literal murder. He was one of the most talented scorers in the NBA. Take a look at some of these highlights.

Gilbert dominated playing the modern game in 2006! He would have feasted today. The game is so much more open these days, the driving lanes he had to create himself are now there naturally (that Wizards team was actually strangely ahead of its time with Antawn Jamison at the four, but in 2018 75% of the league’s big men are just as good, if not better, at shooting than he was). He won’t have such a speed advantage today, but James Harden isn’t exactly Usain Bolt and I think he’s okay at getting to the rim. Gilbert would have lived at the line. He averaged 10 free throws a year in 05-06. Do you know how hard that was? That was prime “back in my day, the game was more physical and we didn’t shoot these god damn three pointers!” time. You had to work for those calls. Now they give them away. Gilbert was so quick and had such a tight handle he might get fully erect seeing all the open space afforded him in 2018. And perhaps the important part? Notice all those long 2s he took? Those would all be 3s today. In his prime, he took about 7 3s a game. He finished first or second all three years in most three pointers attempted. If he played in a time that embraced 3s, it’s not like he’d shoot less. He’d be around 10 attempts per game, which is what the most active 3 point bombers like Harden and Steph Curry hoist up. So he’s taking three more 3s a game for that three year stretch, and, assuming he shoots the same percentage, is making at least one more per game. All of a sudden he’s averaging over 30 points per game over a three year period. His three point percentage would have only gone up, too. Coming to basketball maturity in a 3-centric time would have meant more time spent practicing 3s. He wouldn’t turn into Steph or Klay or anything, but I think he goes from shooting 36% to shooting 38-39%. It’s not a huge jump, but it’s probably another made three a game. So now he’s averaging at least 33 points per game over a three year stretch? That’s enough to get Kobe two jerseys retired.

Now, averaging 33 points for three years would probably already be enough for enshrinement. It’s a running joke that literally everyone gets into the Hall of Fame. But what if it was more than just a three year stretch? At the end of the 06-07 season, Gilbert blew out his knee and was never the same. He played 47 combined games over the next three seasons because of the knee, various other injuries, and, of course, the infamous gun incident with Javaris Crittenton (shoutout to Kentavious Caldwell-Pope for playing NBA basketball despite being in jail). The missed time, off-court distractions, and the weight of the massive contract he signed in 2008 effectively ended his career. Wouldn’t all of that be avoided today? Arenas missed two and a half seasons because of a torn MCL. Paul George missed less than a full season after his leg was severed in two. Modern medicine (and steroids) are so advanced Gilbert would have been back by the All Star break the following season at the latest, using the rest of that season to get his sea legs back. Unless he’s Derrick Rose, that would have been the end of it. He’d be back to getting somewhere between 28 and 35 points a game for another five years or so. Longer, even. LeBron doesn’t look close to being done yet, and, in this scenario, Gilbert is younger than LeBron. He’d pile up some scoring and shot attempt numbers that would make Russell Westbrook green with envy. The contract wouldn’t have been an issue, either. In those days, people were still outraged about contracts and acted like players should apologize that a team wanted to give them a bunch of money. JJ Redick signed a one year, $23 million deal this offseason and people said it was money well spent. I don’t think there would have been any kind of drama around Gilbert getting a max contract. So there’s two distractions out of the way. Lastly, Javaris Crittenton wouldn’t wind up on his team in 2021. So unless there’s another NBA journeyman who likes to bring guns to the locker room out there, I think we can safely say that scenario wouldn’t happen. By playing today, all the things that derailed Gilbert’s career are gone. I’m going to give a conservative estimate and say he would have averaged at least 25 points a game in nine seasons. That’s enough to put someone on the express train to Springfield. I won’t say anything to his team success because who knows what team he’d be on but since it wouldn’t be the Warriors odds are he’ll never win anything, but if he got the Conference Finals a few times and maybe got to the Finals once or twice I don’t see how anyone could say he wouldn’t be a Hall of Famer. Maybe it’s just wishful thinking, but I think Gilbert Arenas is the biggest lost talent in NBA history. Long live Hibachi. 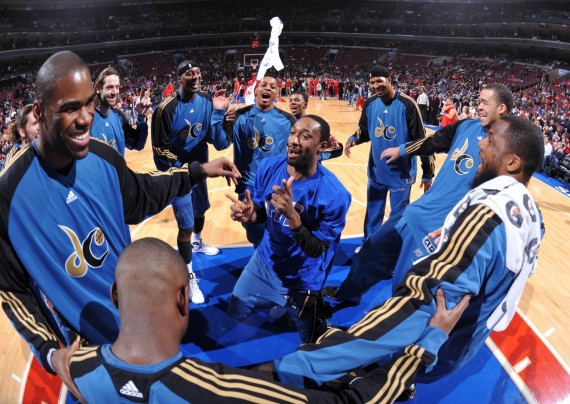