Rejoice and be glad, for it’s finally time for the NFL playoffs. It was a long, mostly terrible regular season, but the carrot at the end of the stick that is playoff football is so close you can almost reach out and touch it. Sadly, the Patriots have yet another first round bye, so they won’t be able to ritualistically murder a hapless AFC opponent this week. Don’t let that take away from the excitement, though. The next three weeks of play get all the shine, but Wild Card weekend is an underrated source of thrills: it’s the perfect blend of pretty high stakes, some teams that were slightly less terrible than other teams in the regular season, and, of course, the start of the Playoff Diet, which consists entirely of pizza, wings, chips, various dips, and beer. Gym’s open on Monday, though, so it’s okay to pig out.

With only four games this weekend, it’s time to get a little more in depth on each game. I’m a stat junkie, so I’ll be hitting you with as much hard-hitting #analysis as you can handle. Aside from ESPN and NFL.com, the sites I like the most are Football Outsiders (DVOA), Pro Football Focus, and some other, secret corners of the web that only the true football intelligentsia can access. Not only that, by doing this in the middle of the Bomb Cyclone currently blasting the Northeast, I’m imbued with all of Mother Nature’s game-predicting prowess. As you all know, I went 256-0 in the regular season, so I’ll be looking to keep things rolling in the playoffs. All lines taken from Bovada.

You knew the second the Titans clinched a playoff berth that they’d be playing on Saturday afternoon, and here we are. In many ways, this is the least intriguing playoff game I can remember. The Titans are just terrible and the Chiefs are one of the least trustworthy teams in the NFL. The Titans finished in the bottom half of the league in virtually every possible offensive category (the finished 15th in rush yards per game, hooray! DeMarco Murray won’t play, though. Oh no!). They’re totally inept. I was a huge Marcus Mariota guy when he was at Oregon, and I was rooting so hard for him to be good in the NFL. He just isn’t. After showing flashes the last few years, he completely imploded this year. More picks than touchdowns, barely 7 yards an attempt, career low yards per game. He stinks. The Titans stink. I literally can’t remember a worse playoff team. Any team worth its salt should beat this team by 300. Only problem is the Chiefs aren’t worth their salt. Their defense is a total abomination. 30th in total defense DVOA (ignore the 31st ranked team), including dead last against the run. Wait, didn’t we just say running the ball was the only thing the Titans were okay at? Hmmm. Chiefs have an explosive offense with multiple weapons, but the fact that they completely disappeared for the entire middle part of the season shouldn’t be ignored. And, of course, there’s the intangibles. Alex Smith had a career year. That didn’t make him not Alex Smith anymore. I love Andy Reid to death and think he’s the second or third best coach in the NFL, but the playoffs haven’t been kind to him. The Chiefs haven’t won a home playoff game since 1994. I repeat, the Chiefs haven’t won a home playoff game since 1994. You know who’s won a home playoff game more recently than the Chiefs? The Bills! The team that finally broke the longest playoff drought in the league has a more recent home playoff win than the Chiefs. You think the mentally weak Chiefs aren’t thinking about that? You think Travis Kelce won’t be thinking about Gronk somehow getting a comedy special on Showtime the whole game, seething with rage? This game is so obvious it’s honestly depressing. The Titans are winning a playoff game, folks, and the Chiefs are to blame.

Now this is more like it, you’re probably thinking. Two high flying teams locking heads in a playoff shootout. Defense stay home, right? Wrong. Yes, these are two top ten offenses statistically. Very similar, in fact. The Rams averaged 3 yards fewer per game than Atlanta (it should be noted that the Rams didn’t play their starters in week 17). Both strike a strong balance between a downfield passing game and tough-yet-explosive running games. They can both score points in a vacuum. But this isn’t a vacuum, and the Falcons’ defense stinks and the Rams’ doesn’t. In DVOA, which I go to all the time and admit isn’t perfect, the Rams rank 6th in defense and the Falcons rank 22nd. The Rams rank 3rd against the pass, and, despite struggling against the run, have the best defensive tackle in history on the roster. The Rams also had more sacks and ten more takeaways. They’re just better defensively. And the Rams best unit is special teams, too! They have the second ranked special teams in DVOA, trailing only the Ravens (who didn’t make the playoffs, so make of that what you will). The Rams hold a clear advantage on the field and on the sidelines. Dan Quinn is an abysmal game coach. The amount of basic strategic mistakes he makes every week is totally baffling. Sean McVay, on the other hand, is probably the leader in the clubhouse for Coach of the Year. So the Rams have a better d, better special teams, a better coach, anything else? Oh, yeah. They don’t have the biggest collapse in sports history weighing on their minds. Matt Ryan took a huge step back this year already, and once he feels those bright playoff lights shining down on him, he’s likely to collapse. This one could get ugly.

Bills-Jags playoff game let’s goooooooooooooooooooooo!!! The ultimate bizarro world matchup. Two of the sparsest yet most passionate fan bases in the league. Two of America’s most treasured cities. Two of the proudest, most historic franchises in pro sports. I’m legitimately excited for this game, but I’m worried that may be short lived. To put it simply: the Jags have the best defense in the NFL and the Bills have one of the worst offenses and may be without their best player LeSean McCoy. It pretty much just comes down to that. The Bills won’t be able to get anything going on offense. The only thing they have is that they don’t turn the ball over: take away the Nathan Peterman game and they’d have the fewest giveaways in the league. It just so happens the Jags had the second most takeaways in the league. “But Brian,” you’re saying, “the Jags offense isn’t good either. Do you really trust Blake Bortles in a playoff game?” As for Bortles, honestly I have an odd amount of faith in him. He just seems like one of those guys who’s randomly good in the playoffs. As for the offense as a whole, it’s true, it isn’t especially good. It also isn’t that bad. 16th in DVOA, but 6th in total yards and 5th in points per game. The Bills defense also leaves a lot to be desired. Rookie corner Tre’Davious White is an absolute superstar, but they finished 31st in rushing defense DVOA and gave up more rushing TDs than anybody. Guess which team finished the season with the most total rushing yards and tied for second in rushing touchdowns? If you said the Jaguars, you’d be right. I feel the city of Buffalo’s pain, but their first foray into playoff football since 1999 might be short-lived. 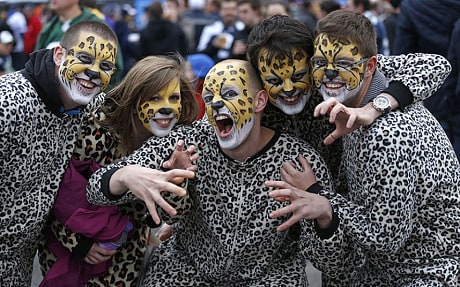 It’s NFL Cliche cannon at this point that it’s tough to beat a team three times in one season. But is it, though? Turns out not really. There have been 20 playoff games where one team won both games during the regular season. The team that won the regular season? They’re 13-7. Saints won both times these two teams met up in the regular season and the game is being played in the notoriously difficult to play in SuperDome. Defensively, they’re so similar it’s almost not even worth talking about. They finished 8-9 in defensive DVOA and were one point away from allowing the exact same amount of total points on the season. Panthers had more sacks, Saints had more takeaways. It’s a wash. Panthers offense, on its best day, is adequate. Saints have the best offense in the NFC and a definite coaching advantage. Do people even know Drew Brees set a new completion percentage record this season? He and Mike Thomas are somehow afterthoughts, that’s how good the Saints are on o. Unless Cam Newton goes crazy and drags the team to a win, I can’t see the Panthers winning. I can see them covering, though. Seven points is too much for a third matchup of the season that doesn’t involve the Patriots.