So there I was, minding my own business in the grocery store, when what do mine eyes see? Another in the growing list of foods that should not exist: beet flavored snack crips. Not only beet flavored, but made of beets! 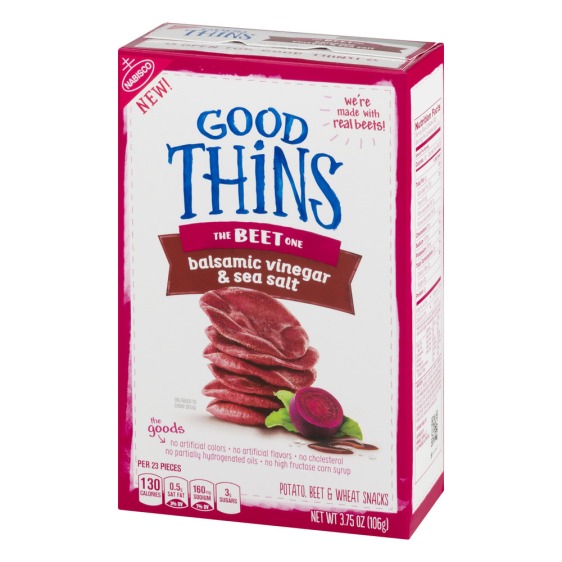 Initially, I felt deep anger. Why would anyone want this? Why would anyone think this needed to be made? Who would hate themselves enough to eat these? The answer, it turns out, is me. I couldn’t resist this demented food curiosity.

Maybe the worst thing I’ve ever eaten, and I’ve eaten a lot of bad things. I just don’t understand why we need this? What is the demand for beet snacks? Are we as a society so helpless that we need to eat disgusting beet flavored snacks to tell ourselves we’re healthy? What happened to just eating regular old fruits and veggies?

Listen, what people eat isn’t really my business. Eat what you want, when you want. But junk food is my world. You mess with salty snacks and you mess with me. These are an abomination and an insult to Nabisco’s legacy. You already make Wheat Thins! Those are kind of healthy. Is that not good enough anymore? Do we really need to appeal to every possible palate and every dietary need? How about if you want to eat healthy you just don’t eat Doritos? Is that so crazy? I shouldn’t have to look at beet flavored snacks when I go grocery shopping. And you know the only people buying these (besides me) are moms who are trying to force their stupid children to eat healthier. You really think little Aiden is gonna be happy when he takes out a bag of beet thins at lunch and all his friends have real chips? That’s how bullying starts. Beet thing only belong in one place.

Quite frankly, I’m sick and tired of being sick and tired of Big Snack slapping me in the face with these science experiments. This has been going on way too long. Know your audience. Do think the people that buy their body weight in Cheez-Its, Pringles, Goldfish, Doritos, Oreos, and every other salty or sweet snack under the sun want vegetable flavored snack crisps? As someone who fits the previous description, the answer is no. Snack companies need to accept that stoners (I’m not a stoner, Mom, don’t worry. I just eat like one), not suburban moms are the key demographic. Why do you think Mountain Dew and Doritos are so powerful? Because they embrace this fact and run with it. Nabisco is responsible for things like Nutter Butters, Chips Ahoy, Oreos, Cheese Nips, and Chicken in a Biskit and now they want to make beet flavored snacks? Get out of here with that nonsense. I’m old enough to remember when the snack world was pure and no one cared about how unhealthy everything was. I fear I may also be young enough to live to see a day where the unhealthy snacks get pushed to the margins to make room for the growing wave of healthy, completely inedible snacks. And that, friends, is enough to bring a tear to my eye.

While we’re talking about grocery store, I had to include this story, as it pertains to the Grocery Store Rules.

source– An 87-year-old man has been invited back to an Upstate New York Wegmans grocery store after he was banned from the premises for sampling hot soup last week.

In a viral Facebook post that has since been deleted, Maureen Singer said her father, Herb, was booted out of the Johnson City Wegmansafter a member of the store’s Asset/Protection Department accused him of “stealing” hot soup.

Singer also wrote that he was made to sign paperwork he did not understand, and told he could not return to the store where he also gets his medication from the pharmacy for two years.

She admits that Herb did take a “few spoonfuls of soup — which he understands to be samples.” It was not clear if he was using the same spoon or a different spoon for each sampling.

I don’t care how old you are, if you take hot soup and eat it before paying for it, you deserve to get banned for life. I stand with Wegman’s 100% and it’s total B.S. they had to apologize. This old geezer is lucky I wasn’t there, or he would have faced a much stiffer penalty than just signing some paperwork.

To refresh, the Grocery Store Rules:

If you don’t understand these basic tenants of society, odds are you’re too oblivious to function in a civilized culture in the first place.