Sorry, haters. Patriots won the Super Bowl yet again. Ho hum. The most unprecedented dynasty in the history of professional sports continues, making all of you losers sick. Please tell me how little you even care about football or how this represents evil winning or whatever it is the Deadspins of the world are saying today because they’re sick of their team not winning and have thus decided to paint the Patriots as a legitimately bad entity which is stupid and irresponsible but it’s okay because Tom Brady has a lot of money or something or about how no one actually counted them out or any other stupid hate you have in your heart. Give me all of it. It gives me strength. It gives me life knowing that your entire existence is made worse simply because Bill Belichick is smart enough to keep a roster together for 18 years. Oh, right, I forgot to add in to tell me about how they’re nefarious cheaters. That one definitely holds up if you spend ten seconds doing any research or free thinking whatsoever, you’re right. Whatever. Today isn’t about the sourpusses who are going to throw a party when all this theoretically ends but then realize how much they miss having them around after a few seasons of revolving doors of conference champions. Today is about the people who have been there from the beginning or even for those noble souls who, despite not being Patriots fans, have the brainpower to respect this dynasty. To them, I ask this question: was the first half of the run better, or was the second half better?

I suppose it’s a little disingenuous to divide it into two different periods since there’s really three. First was 2001-2007, where they won two Super Bowls, could have won five, and were unquestionably the best team in the league. Then there’s 2008-2013, where Brady got hurt, they had some weird years where they were kind of lost in the wild, momentarily had a revolutionary offense before another random Giants loss and a….high profile arrest, and were always just on the outside looking in. Then there’s 2014-now, where they’ve now won three Super Bowls and could have won two more in a different dimension. All in all, six Super Bowl victories in nine appearances and would have won two more in 2006 and 2013 if they hadn’t lost on the road in the AFC Championship game. It’s pure absurdity.

Anyway, 2001-2007 or 2014-now? 2001 was the first year I cared about football, so that season means a lot to me, and 2007 was my favorite team ever (too bad they canceled the Super Bowl that year). But the rest of those years are kind of hazy for me. I don’t remember a single thing from 2002 besides the Super Bowl, which did not involve the Patriots. 2003 and 2004 are kind of there, but not really. I have more memories from those episodes of America’s Game than the actual seasons. I don’t know why my brain has abandoned large portions of my adolescence, but it did. You could easily convince me 2005 never happened. The only thing I remember about 2006 is the AFC Championship Game. Reggie Wayne sort of fumbling the ball up into the air was the first time football ever momentarily killed me. Then 2007 gave me the worst night of my life. So from a personal level, this latest run was better and far more memorable. Was it better, though? It’s so hard to compare. Don’t know if you’ve heard, but the Patriots are constantly changing and adapting. Last night certainly reminded me of the old teams’ stifling defense, but I think their offensive prowess kind of gets underrated as the years go on. Their winning percentage is slightly better in this recent era, despite the fact that there’s, you know, an undefeated season mixed into the first one. I’m just gonna say this recent run is better. It’s been more fun and so much more satisfying as the haters run out of ground to stand on. I like grizzled Brady better, anyway. But hey, he kisses his kids on the mouth a little too late in their lives. So at least you’ve got that. 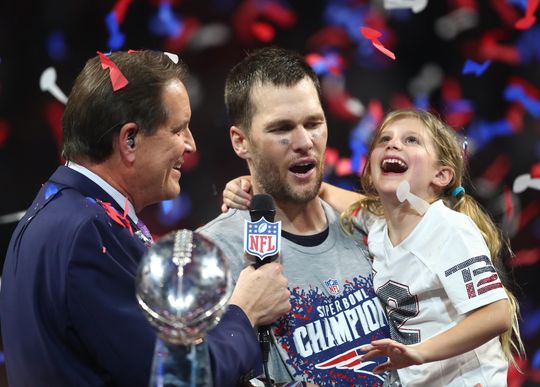