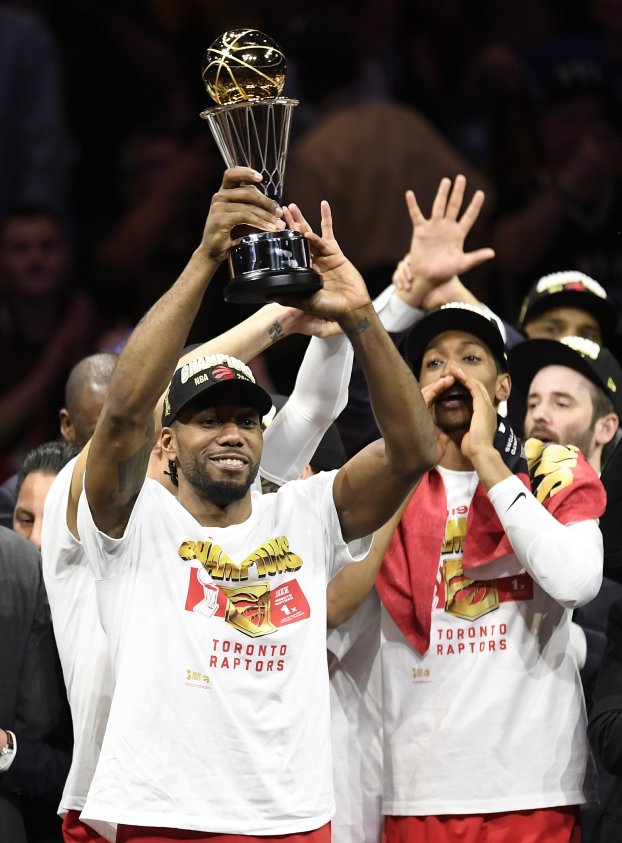 The Toronto Raptors are NBA champions. Doesn’t quite sound right, does it?

It’s kind of funny how we frame unexpected champions, particularly in basketball. It felt so bizarre that the Mavericks won the title off of LeBron and the Heat in 2011, but they won 57 games and were top ten in every offensive and defensive metric. The 2006 Heat felt weird as it was happening because Dwyane Wade, not Shaq, was leading them. The 2004 Pistons weren’t as good as the 04 Lakers on paper, but the Pistons allowed a comical 84.3 points per game that season (much, much different league, but still). It seems odd and random that the Raptors would win the championship this year, but it’s only because they’re the Raptors and they beat the Warriors. Other than that, this was likely the second or third best team in the NBA during the regular season and only got better in the playoffs. 58 wins, top five in offensive and defensive rating, and lead by one of the premier singular talents in basketball. A worthy champion and a deserved Larry O.B.

A couple things that merit discussion in the wake of these Finals, so let’s just get the Warriors talk out of the way first. Brutal, brutal loss. Last game at Oracle, lose KD and Klay, got roasted online. Regardless of what Durant and Klay do, the Warriors will look different next season, and their role as the league’s goalpost will likely at least take a yearlong hiatus. Klay and the Warriors’ collective championship spirt availed themselves well last night, but there’s only so much a limited roster can do against a team as talented as Toronto, particularly when Steph (online debates have shredded any chance of having perspective on things currently happening, but Steph is still a top-25 player all time, even if you don’t like him. Took Brady six rings before everyone got the poop out of their diapers and begrudgingly admitted his greatness) struggled like he did. Not trying to make excuses for him, but Steve Kerr didn’t do him any favors in the fourth quarter. Still, even if Steph did make the last shot, they would have just lost on Sunday. Attrition comes for everyone, and honestly, better to lose valiantly in front of your own fans than lose by 40 in front of Drake.

But enough about them. This should be about the Raptors, and, as is the case with every dynastic team that loses, I fear it likely won’t be. So many players are talked about differently now: Kyle Lowry, the human embodiment of lackluster playoff performances, is now an NBA champion who had an awesome closeout game, and now we can finally appreciate his five All-Star games and All-NBA selection. He was really good on both sides these playoffs! Gonna be someone we value more the longer he’s away from the game. Danny Green is now a two-time champion and no one cares he threw the ball out of bounds with the series on the line. Patrick McCaw has literally never not won the title. Fred VanVleet, even if it was just a random hot streak, put his name among all the other role players who unexpectedly swung series and championships and finally gave the college purists a win. Jeremy Lin has a ring now and Carmelo doesn’t. Serge Ibaka gets one before Harden and Westbrook, and honestly, they don’t even make the Finals without him. And Marc Gasol, my sweet, sweet Spanish son. He’s been one of my favorite players for years, ever since Grit ‘N’ Grind burst onto the scene. So smart, so skilled, so unselfish. His ring is for ZBo, for Tony Allen, for Mike Conley, for every fat guy who can’t jump more than 10 inches off the ground and has to rely on positioning and guile. He had a glorious two- or three-year stretch as the best passing big man ever before Jokic redefined what that even meant. I’m just so happy he finally got to taste the air at the top of the mountain, a long-overdue cap to a fabulous career. And what about Nick Nurse? Rookie head coach winning the title by pressing all the right buttons and (mostly) avoiding mistakes. Is he the next great coach or did he get lucky by having a great roster? Only time will tell. Having no context of what GMs make, the Wizards offering Masai Ujiri $10 mil a year seems like a steal.

The main focus, however, is on the Raptors’ two best players- Pascal Siakam and Kawhi Leonard. Siakam, despite having been a far more anonymous college player, is suddenly on a similar career track to Leonard: non-lottery pick, rapid development predicated on extreme length and athleticism, and now the title in the third season. He’s a little older than Kawhi was at this stage, but after what we saw all year you kind of have to wonder what his ceiling is. All-Star, for sure, but could he make it to first- or second-team All-NBA level? I won’t rule it out. It wasn’t perfect these playoffs; there were times where he seemed a little in over his head. But he always recovered, and I’m excited to see what he can do next year as the Raps’ top dog (sorry, guys).

Kawhi now has to be talked about a little differently. Two Finals MVPs is nothing to shake a stick at; only twelve players have ever done it, and only he, LeBron, and Kareem have gotten one for two different teams. He averaged 30 a game these playoffs and, ever since the first championship with San Antonio, has established himself as one of the best playoff performers in NBA history. He’s got the clutch moments, he’s got the huge games, he’s got the consistency and quiet leadership, he’s got the all-time defense. Once he adds longevity it’ll be clear that this is one of the best players ever and it came out of nowhere. He’s probably going to the Clippers in the offseason and, with the Warriors down…. maybe? If he’s got enough juice to overcome the Raptors’ Loser DNA and then the Clippers’ Ultimate Loser DNA he should be put in the Hall of Fame on the spot. I can’t wait for his induction speech, man. Maybe he just won’t show up. Not sure I’d blame him one bit.

No league is ever really over these days, so the Raptors only have a week before the Pelicans capture everyone’s imagination and then whichever team makes the biggest splash in free agency. But for now, at least, the North is king. Insert Drake lyric here.