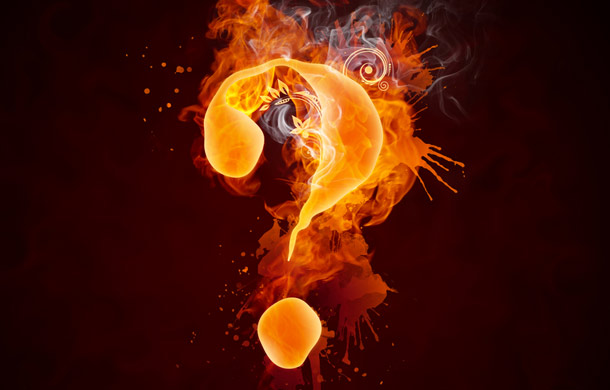 It’s been a little while, but we’re back with some more Burning Questions, straight from the People. The Burning Questions Mailbag was starting to get some serious buildup, so I had to give it some release. Plus, what better way to celebrate Memorial Day than answering other people’s important quandaries? Considering how heavily these Questions have been weighing on my readers’ minds, solving their problems kind of puts me in the same class of hero as the brave men and women we’re remembering today, right? I’ll keep telling myself that, at least. As with last time, we have to start with a question from the most important member of the #BurningQuestions community, myself.

Brian asks: Why do some people put toothpaste on their toothbrush before running it under water?

There are of a lot of great mysteries out there. Who was Jack the Ripper? What is the Meaning of Life? What happened to Jimmy Hoffa? What’s up with the Bermuda Triangle? Even the Mysteries of the Rosary. But for my money, absolutely nothing beats this. Why the hell do people put toothpaste on first? The order is wet toothbrush, put on toothpaste, brush teeth, wash toothbrush. It’s not exactly rocket surgery. There’s four steps and people somehow still mess it up. You don’t put milk in the bowl before the cereal, you don’t put socks on before underwear, and you don’t put toothpaste on before running it under water. Not to take a shot at the fine parents across this great nation, but if you allow your kids to do this, you’ve failed to produce a contributing member of society.

xboxguy asks: As the streaming industry takes off (this year there will be more time spent watching games than playing them) and services like Mixer offer a more interactive viewing experience (crowd can vote on key decisions and impact the gameplay), will we see a shift in the way games are designed?

Well, I didn’t really expect to get into a discussion about the fate of the video game industry, but here we are. This may get a little nerdy, so bare with me. As far as Mixer is concerned, while it is assuredly the most advanced and efficient version of this type of populist streaming, it’s not the first time we’ve seen it. Consider the tale of Lord Helix, the central deity from Twitch Plays Pokemon, a bizarre experiment that asked the question “what if every decision in a Pokemon game, down to the direction the main character walked, was made by an internet comment section in real time?” Needless to say, they made a complete mockery of the game. But, by introducing complete chaos into the relatively straightforward story, an entirely unique experience was created. It was so popular, they did it more than 10 more times. Now, Pokemon games are handheld games with simple mechanics and rudimentary decision-making. It’s relatively easy to subjugate them to the whims of the masses. If things like Mixer can effectively bring a similar experience to current-gen console games, then it’s almost guaranteed to change the way games are developed. Considering the popularity of streaming (I’m not really a streaming guy, but, for some games, I understand the benefits of watching someone else play. Now, if you’re going to sit there and watch someone else play, and then make all the key decisions and impact the gameplay? Just play the game yourself), games who focus on streaming will undoubtedly add features to encourage audience participation. I suspect, soon enough, almost every game will introduce some kind of peanut-gallery-friendly mechanics. The gaming industry has never been one to stand in the way of progress, and I fully expect this to be a massive hit.

BlacktopLebron asks: Couple NBA questions- is the lottery rigged, and who are your top ten NBA players right now, based purely on talent (not age, contract, success, etc.)

Rigged? The NBA Draft Lottery? It can’t be. Not the same lottery the Celtics just won by pure chance and of their own merits? Never! (But, in all seriousness, yes, of course it’s rigged. You think the Lakers kept their top-3 protected pick by chance? You think the still-NBA-owned New Orleans Hornets won the lottery because of luck? Or that the Cavs won a million straight lotteries despite having astronomical odds after LeBron left town? Or the Bulls somehow winning the Derrick Rose lottery? Please. Russian elections think the NBA Draft Lottery has a dubious history)

As for my top ten, it looks something like this:

Excellent question as always, WhiteKong. Not many things in this world better than a good sandwich. I’m assuming by specialty sandwich, you mean anything more complex than a basic deli meat sandwich. Don’t get me wrong, good deli meat is excellent. But sometimes, your body needs a something more than just turkey and condiments. Now, to avoid the more annoying, trapped-in-2015 sections of the internet mob, I’m drawing some guidelines here: this only counts regular sandwiches. Meat between two or more separate pieces of bread. Anything served in a hot dog bun doesn’t count. Also, no specific fast food items, either. Only things you can either make at home or get at any good sandwich place, not one specific restaurant.

XtothaG asks: Will Andre 3000 ever come out with a solo album?

If I knew the answer to that, I’d be doing something better with my life than writing this blog.

Easy. “Hey, do you read briansden69.com? Wow, me too.” Hope you’re ready for what comes your way.

KingRichard1911 asks: What would be the best period of history to live in?

I assume you mean besides “right now.” Quality of life in anything before 1950 is going to be pretty lousy, so I’ve got to pick a time where my modern-day knowledge would make me a king, but where it’s not so much greater than what the people have that I’m considered a witch. And, in the likely event that I’m killed, I’d prefer it to be something quick like a gun, not a dull bone knife. That’s a pretty small window. I’m thinking anywhere from the late 1600s through the 1700s or so would be good for me. If I went back there with a set of modern maps, I could easily become the greatest pirate ever. All I’d have to do is not get caught. Avoiding the law in any time before the Civil Rights Movement should have been the easiest thing ever, so I’m good there. Or, since I’d be the biggest, strongest, and smartest person there, maybe I could lead the Continental Army against the British. I’d be the first president, not George Washington. And, since I lack his honor and foresight, I’d just stay president until I die, creating the exact same system of government that I just spent many years fighting to avoid. Or I could just be a taller, smarter Napoleon who doesn’t do stupid shit like invade Russia or get into pointless wars with Spain. Really, the possibilities are endless for anyone who just isn’t an idiot. That’s the only pre-requisite for world domination.

Last time I discovered that cantaloupe was the most underrated fruit, so I guess it’ll now become tradition to debate which foods are properly rated. Not that I’m complaining, or anything. My food takes are rock solid, so it’s an honor that many people come to me looking for guidance. Now, there are tons of overrated foods. Off the top of my head there’s things like Taylor Ham, Sriracha, quinoa, kale, wasabi, the list goes on. But, I keep coming back to avocado, but I actually don’t think it’s the true answer. Let’s get it out of the way, though: avocados suck. I know I have to renounce my status as a millennial for saying it, but someone has to. I’m sick of being held hostage by this stupid fruit. Avocados don’t taste good. They don’t even really have a taste. They’re just mush. Hey, Chipotle, I’ll keep my $20 for a small cup of guacamole, thank you, because guacamole stinks. But, as I said, avocados aren’t the most overrated food. You know what is? The term superfood. It’s the entire reason avocados became popular in the first place. They’re the original superfood. People are completely obsessed with the concept of superfood. What, do you think an avocado is going to do your taxes or something? Rescue your cat from a tree? What happened to something just being healthy? Now it’s got to be a superfood. And they’re all so in-your-face, too. People trying to get my to eat açai berries or something. Please. And everything’s a superfood, now, too. “Blueberries found to be newest superfood.” Just because it tastes good and is healthy doesn’t mean it has to be called a superfood. Pretty much everything outside Chili Cheese Fritos is a superfood these days. Literally every fruit. Pretty much every nut. Most fish. People saying wine is a superfood. If everything is a superfood, how can anything be a superfood? It’s so stupid. Avocados are healthy. That’s good to know. Calling it a superfood doesn’t make me want to eat it. It doesn’t make me want avocado-flavored stuff. It doesn’t make me want avocado-themed clothing. It doesn’t make me want to name my first ten children Avocado. It’s like the insufferable bacon craze that finally died down. There’s always the It food that everyone thinks everyone else loves and wants to jam it down the public’s throat 24/7. And right now, it’s Superfood.

DeerHit45 asks: As medical sciences continue to push towards reversing the effects of aging, humans are quickly becoming immortal. Will this make life lose all meaning?

Had to end with a feel-good question. I mean, yeah, if everyone was immortal I don’t think everyone would care about anything anymore. What would be the point? The skydiving industry would love it. Casinos would be thrilled. Amusement parks would be on the rise. People would just spend their infinite lives searching for thrills, for anything that made them feel alive. Or feel anything at all. There wouldn’t be some great progress or new utopian society. That’s just not how humans are wired. If our lives had no end, all meaning would be sapped from it. Why should I ever go to work? Why should I leave the house? Whatever it is I was going to do, I can do it tomorrow. After all, I have all the tomorrows in the world. If you think humans are lazy now, just wait until we’re immortal.