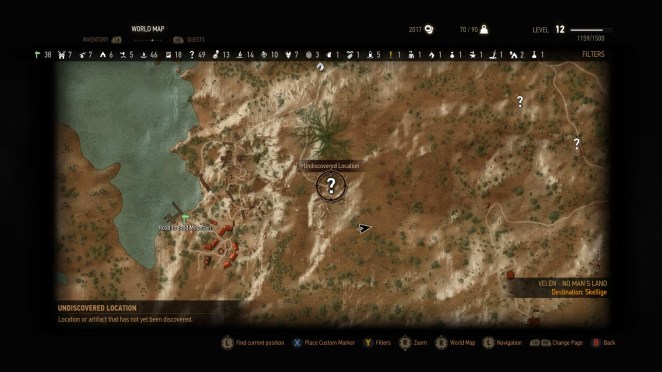 I’ll start this off the same way I do every blog about a particularly nerdy or granular topic: this probably isn’t for everyone. I’m going to be diving into very trivial matters of the video game world that, like, five people besides me care about. I won’t feel that offended if you don’t bother reading this. That being said, you should still read this.

So, as I am every year around this time, I’m deep into Assassin’s Creed. Assassin’s Creed Odyssey is awesome. Ancient Greece is one of my favorite time periods and it’s just a good game (if you’re wondering why I haven’t reviewed it yet, it’s because it’s so huge and I physically can’t get myself to ignore the non-main story elements. And I’ve been busy doing other stuff. Like voting, NBD) (Yeah, I voted. Got a sticker and everything. Yes, it does make me better than you). Anyway, as I explore the massive world, the same thing that struck me when I was playing Assassin’s Creed Origins hit me now: this is just Witcher 3 with a different skin. My thoughts were mostly drawn to the presence of undiscovered locations on the map represented by white question marks. The first picture is from Witcher 3. This is from Odyssey:

Not exactly straying too far from the mold, are they? And that’s not the only thing, either. The combat is pretty much the same, both in mechanics and the way damage is calculated through your own level and gear. The armor rarity and perk system is pretty much the same. I don’t really mind, that much. Why fix what isn’t broken? But this is far from an isolated incident in the video game industry, and I don’t really get why no one cares.

Outside of the people that made PUBG, it seems like every video game company is kind of fine with everyone else just jacking their mechanics and ideas. Take the franchise that started it all. Assassin’s Creed (the first one) is probably the most influential North American game of the 21st century, if only for creating the “climb up to the tallest point to unlock more of the map” thing that every open world game since has included. Every AC sequel, the Arkham games, Spider-Man, Breath of the Wild, a billion others. Horizon Zero Dawn at least put their own spin on it, but it was still the same (by the way, the Mass Effect game that came out a few years ago was literally just Horizon Zero Dawn set in space). Did Ubisoft not care that their IP was being passed around like a hot potato? Or were they more worried about the fact that the counter-based combat system they created was perfected by Arkham Asylum and Batman got credit for it? That same combat system was then stolen from Batman by a million other games, as well, and was the basis for the combat system Witcher 3 created. Which brings us to the most egregious offender of all, Shadow of Mordor and Shadow of War. Mordor literally took everything that made Assassin’s Creed Assassin’s Creed (the free running, the climbing, the viewpoints, the kind of weird storyline) and added, beat for beat, the Arkham combat system. I was stunned no one did anything about it. It was theft, pure and simple. But, to bring everything full circle, Odyssey turned around and stole a bunch of War’s skill tree and completely bastardized the nemesis system, Mordor’s crowning achievement, with the mercenaries. It’s a giant human centipede of gaming ideas and everyone gets a taste of someone else’s game. It’s preposterous.

And this isn’t solely and American thing, either. Our friends from across the Pacific are, if possible, even more shameless than we are. There’s about 10,000 franchises that are bald Final Fantasy imitators (shoutout Lord of the Rings: the Third Age). Random encounters didn’t always exist. Now, try to imagine a JRPG (or any RPG, for that matter) without them. Turn based combat and large parties consisting of a brooding lead, a spunky teen, a jerk with a heart of gold, and a weird mascot/animal who turns out to be a powerful magical creature are now more expectations of the genre rather than novelties. And it’s all because of Final Fantasy. And, to be fair, pretty much every game since Ocarina of Time was released has been at least tangentially based on Ocarina of Time. Shadow of the Colossus is practically set on the same map. Pokémon, which obviously owes a ton to Final Fantasy and Legend of Zelda, was the direct inspiration for, like, a billion handheld games, including the forgotten G.O.A.T. of Gameboy Advance, the Megaman Battle Network series (don’t @ me). Obviously, Digimon was started as a pure Pokémon imitator, but, in a funny twist of fate, the newer Pokémon games wound up stealing the Digifarm from Digimon Story Cyber Sleuth. Like, it’s literally the exact same thing. Poké Pelago in Sun and Moon/Ultra Sun and Ultra Moon is the Digifarm. You store your Digimon/Pokémon and they can level up/find items passively without the player needing to do anything. It has the same expandable islands, the same feeding system, the same ability to customize training focus, it’s literally the exact same thing. And one of my favorite series and one of the more surprising franchises I’ve ever played, Danganronpa, is just Phoenix Wright set in a high school. They didn’t even bother changing up the objection system. Everyone just takes each other’s ideas. It blows my mind that none of them care. Blows my mind. In music there’s a lawsuit if someone uses a similar chord structure. In gaming, it’s all fair use, apparently.

It’s one thing for a massive studio like EA to have all of their games be the same, but the fact that different, non-affiliated studios continue to use each other’s stuff is baffling to me. I’m pretty sure Madden was the first sports game to have the card-based team creator, and I’m shocked they didn’t try to crush 2K for taking it. I get everything’s a copycat league and you want to imitate successful properties, but can we switch things up a little? I realize there’s only so much you can do and I don’t want to be “enough remakes and sequels” guy but at some point maybe change things up? I mean, it’s not like the mechanic hive-mind has really prevented me from enjoying any of these games, but still. Maybe my problem is that I only play the huge AAA titles that are only concerned with making money so they’re more likely to just do what works instead of actually try and innovate. I know I should start playing more independent games if I really want originality, but I need to be able to contribute to the public gaming discussion, and no one cares about independent games. Guess this is more of a me problem, isn’t it? Oh, well. Just had to get this off my chest.