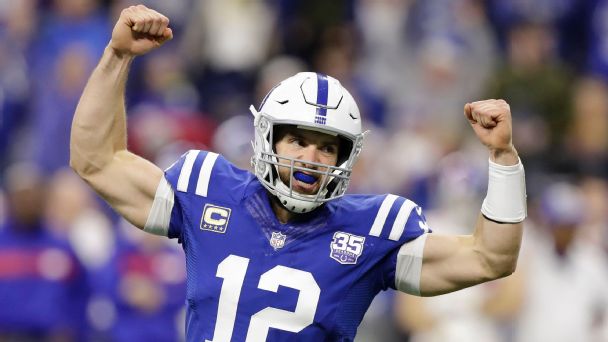 Here we are, folks. Week 17. Last week of the regular season. I can’t believe it. I don’t want to believe it. That’s why this is a day late. I hoped that maybe, just maybe, if I waited one more day they’d add another four weeks to the season. Alas, they didn’t. Now we’re left with a typically dramatic season finale. Win-and-in scenarios, rivalries, Hail Mary playoff dreams that may actually happen, this week has it all. Well, everything besides a large number of compelling games, that is. Most of these are relatively meaningless, at least in the grand scheme of things. But you can’t pick and chose which games you pick here in the Brian’s Den. You get them all or you get nothing. But, as a wise man once said, when all the games are meaningless, that’s when I’m at my best. On to the games.

Also short PSA: there will be no Monday Thoughts™ this week. It’s being replaced by the Countdown of Countdowns and I’m not about to do multiple things at once. Sry.

This game is utterly meaningless. Even more so than your typical Cowboys-Giants game. The Boys’ playoff seeding cannot change and the Giants’ draft position can only change significantly if like, ten other teams all lose. There is no point to this game. I don’t know why they’re playing it, and I don’t know why the Giants are favored by six. The Cowboys are playing their starters (at least for a little while). I can’t wrap my mind around this. I think Vegas made a mistake or something. But they never make mistakes. Now I’m thinking they know something I don’t. Now I feel like I’m being mocked. I refuse to be the butt of anyone’s joke! You think I won’t take Giants -6? Ha! Jokes on you, losers.

This game just shouldn’t be played. No one should risk injury just so both teams get to play 16 games. What can be gained from this? Aaron Rodgers could set a career high in passing yards, which is something, I guess. I suppose there’s a chance Matt Stafford has his Matt Flynn game to stave off his first ever 16 game sub-4,000 yard season. Other than that I don’t really know what we’re doing here.

I’m glad this is the Jets, not the Dolphins. Pats need this win to secure a vital bye (and a very outside shot at the 1 seed). I know the Jets would love nothing more than to spoil the party, but they’re still the Jets. The still stink. They could still get the number one overall pick. They’ll roll over. If they know what’s good for them, at least.

Oh, Panthers. What might have been? Nothing at stake here besides stats, and I really hope Christian McCaffery gets fewer than 155 receiving yards. I’m sure most people are rooting for the third ever 1,000-1,000 season, but I’m rooting for the fifth-ever 100-plus catch, sub-1,000 yard season. I just think that’s a lot funnier. Teddy Bridgewater is starting for the Saints, which means the streak is over: for the first time since he arrived in New Orleans in 2006, Drew Brees won’t throw for 4,000 yards. He’ll finish with 3,992, which would make me absolutely livid.

Do we really need to do this one? Maybe just add a running clock or something. Let’s get the fellas on vacation, already.

The first legitimately interesting game, but it’s only interesting because of the possible result. The game itself is going to STINK. Texans can finish as the 2, 3, or 6 seed depending on how things shake out, and them getting a wild card spot would be very funny considering they won nine straight and were a virtual lock for the division. Listen, I know Deshaun Watson isn’t Matt Schaub, but teams can only run away from their DNA for so long. Do you trust the Texans in a must-win game that’s happening after Christmas? I don’t.

I’m really not sure what anyone is going to get out of this game.

Seahawks could theoretically fall to the 6 seed if they lose and the Vikings win, but let’s be honest- neither of those things is going to happen. Seattle already got its weird late-season loss out of the way a few weeks ago.

A win combined with a Chiefs loss gives the Chargers the 1 seed, while a loss secures the 5. Pretty simple. I hope the Chargers get it because going to the StubHub Center isn’t quite as intimidating as going to Arrowhead. Although I suppose it’s time to ask if I really want another Pats Super Bowl run…

I don’t understand this line whatsoever. The Bears are good and the Vikings stink. Bears still have something to play for, too. This isn’t gonna be Kirk Cousins lighting up the second and third stringers. This is the best D in the league against Cousins in a must-win game. And the Vikings are favored more than the standard home-field advantage? Excuse me?

All the Rams have to do is not blow it and I don’t know if I trust them enough to say they won’t.

I’m all in on another Nick Foles Super Bowl. I think it’s just because of the complete chaos it would create. Like, if the Pats can’t win (they won’t), then I want the Eagles to repeat for the pure absurdity of it. Nick Foles was a second away from being out of the league! He stunk! And now he’s the perfect QB. What a world.

Gonna combine these two because I feel like I can’t talk about one without the other. Ravens win the division with a win, Steelers win the division with a win and a Ravens loss. This is seemingly the easiest “win-and-get-help” scenario in recent memory because I actually think the Browns are going to win. The problem is in the other game. Mark it down, lock it up- the Bengals are beating the Steelers, thus completing one of the most disappointing seasons of the 21st century in professional sports. There are people who said this was finally the year for the Steelers. I laugh in their faces.

You know what, why not?

The big one. This is for all the marbles. It’s Luck vs. Gabbert on Sunday Night Football! Marcus Mariota might play. I don’t think it really matters. Colts are better at pretty much everything. Titans are the NFL’s ultimate cockroach, but barring a Derrick Henry explosion, they’ll finally die this week. Expect a lot of “well why can’t Andrew Luck win MVP?” debates on Monday morning.