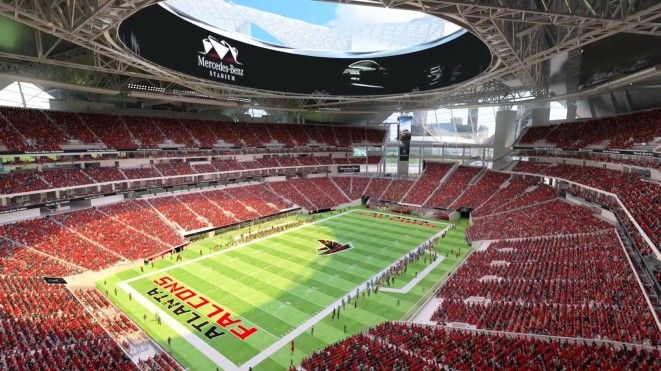 source– Sure, most everyone loves Chick-fil-A, but the popular restaurant chain will be closed during a majority of the Falcons’ home games in 2017 at Mercedes-Benz Stadium, according to ESPN sports business reporter Darren Rovell.

In fact, the only day the Chick-fil-A inside the stadium will be open, is on December 7, when the Falcons host the Saints on Thursday night.

I cannot possibly overstate how much I love this move. It’s genius. Pure, unadulterated genius by Chick-fil-a. Outside Taco Bell, no fast food company understands human nature and the marketing game quite like Chick-fil-a. The fastest way to get someone to want something is to tell them they can’t have it. Anytime I drive past a Chick-fil-a on Sunday, my cravings for the sweet, succulent chicken sandwiches go through the roof. It’s all I can think about. My desire to spend money at Chick-fil-a consumes me. And I’m only one guy. When the dozens of Falcons fans who’ll pack Mercedes-Benz Stadium walk by the ghostly visage of a closed Chick-fil-a, well, let’s just say I wouldn’t want to be working at an Atlanta area Chick-fil-a come Monday mornings in the fall. Talk about a mob scene. I guarantee this sends business skyrocketing. Chick-fil-a is going to make a killing off this, once again proving that being closed on Sundays is one of the greatest business decisions of all time. They’re the anti-McDonald’s. If you have a way to keep something exclusive, do it. Don’t make breakfast all day because now no one cares about McDonald’s breakfast. Don’t open Chick-fil-a on Sundays because then no one will experience seeing a closed Chick-fil-a. It’s so simple, but it’s why Chick-fil-a is king.

As for the Falcons, the losses just keep on coming. First, they suffer the worst defeat in the history of professional sports. Then, their new stadium doesn’t even work. And now this. Sure, this is great for Chick-fil-a, but it’s horrible for the Falcons. What were they thinking? How can you let yourselves, an NFL team coming off an albeit doomed Super Bowl appearance, get completely dominated by a fast food joint? I’ve never seen anyone get cucked harder than this. I’d love to have been in the room for when this was pitched. Probably some 45-year-old father of four brought this idea to the board like “Hey, guys, I’ve got a great idea! Let’s get a Chick-fil-a in the stadium! It’s what’s hip with the kids these days, I’ve heard. Sure would be great to have young people talking about the Falcons in a positive light. I sure am tired of getting destroyed on the Twitter, how about you fellas?” Great idea, man! Too bad Chick-fil-a is run by geniuses (they’re probably not geniuses they’re just really religious, but accidental genius is still genius) who would never pass up an opportunity to build business and throw their balls on the table like this. I bet the Falcons paid for everything, too. The probably bought the franchising rights, paid for the construction, hired the staff, took care of all the overhead costs, everything. Too bad they forgot Chick-fil-a bends for no man. Unbelievable. This is why it amazes me every time I see people say the Falcons are going to be good this year. Are you kidding? This franchise is completely and utterly broken. The Patriots killed them. The losses keep piling up with no end in sight. The players all snapped and hate each other. The coaches are going to be second guessing everything they do. They’re going to treat closing the retractable roof as a real accomplishment. Their legion of devoted fans disappeared as quickly as it burst onto the scene. They’re getting mercilessly dunked on by Chick-fil-a. It’s over for the Falcons. They might not win a game this season. Honestly I’d be surprised if they did. It’s going to take something monumental to get this franchise back on the right track, and I see that miracle happening anytime soon.