As is tradition, the start of NFL training camp brings us another season of Hard Knocks, the first real sign that the NFL season is nigh. The groundbreaking documentary series has changed the way we think about training camp, and, really, the way we think about sports documentaries in general. If you don’t have ultimate access, I’m not watching. If I don’t know what the third string QB’s meal plan is, why should I even care? Still, at this point I love what Hard Knocks represents more than I love the actual show. Much like with All or Nothing, any kind of football is good enough for me at this point, particularly when it means we’re mere weeks away from college and NFL kicking off for real. But the seemingly never-ending streak of getting super boring teams for Hard Knocks probably isn’t going to change with the Bucs this year. Hard Knocks is only as good as the head coach, and Dirk Koetter is…. well, he’s alive. I think. I honestly don’t think I could pick him out of a lineup. That’s a bad sign. Still, I’m going to watch it. You’re going to watch it. Everyone’s going to watch it and wonder why we’re doing so in the process. It’ll be great. As an experienced Hard Knocks viewer, there are certain things that appear time and time again. Time is a flat circle, and nowhere is that more apparent than on Hard Knocks. Here’s a quick primer for everything you’re going to see this season.

This is pretty unique for this season, but the fact remains that, unless you’re one of the dozens of diehard Bucs fans, this will be your official introduction to Dirk Koetter, and, if this picture is any indication, you won’t be in for much. My guess is he either loves to fish or play golf and stays until all hours of the night watching film. A real breath of fresh air in the coaching world.

Happens every year. Every coach thinks this is his time to shine. Turn up the personality to 11, say the F word ten times a sentence, make a ton of sex analogies that don’t really work, talk about drinking or smoking, have a scene where they’re playing cards together, really anything to seem cool and relatable. Looking at the Bucs’ coaching staff, I’ve got together some prime suspects:

Not the most promising batch of coaches. A lot of old guys, a lot of guys who look like they haven’t been out of a team facility in 20 years. I’m not positive these are the guys, but they’re some of the youngest looking, and defensive line coaches are always a little wacky. Same goes for the strength and conditioning coach. He looks like he’ll murder you and wear your skin if your squat form is a little off. He could be electric! Just kidding with Mike Smith. He’s the most boring person of all time.

The Stupid Player Who They Exploit for Some Easy Quotes

One of the best traditions Hard Knocks has is filming a football player who hasn’t read a book that didn’t start with “play” since the first grade talking about something other than football. These guys’ world views are so skewed, anything could come out of their mouths! Tune in tonight to find out what they say! Anyway, there’s only one possibility for the Bucs. Anytime HBO can combine their Idiot screentime with their Starting QB screentime, you have to do it. 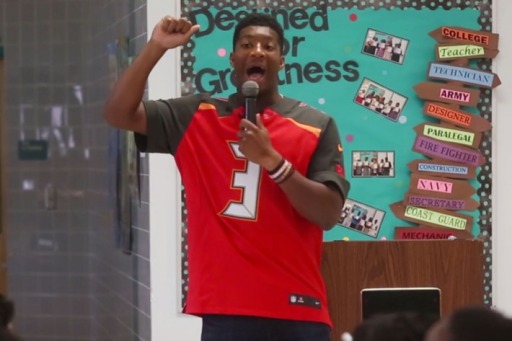 Seeing Jameis Winston say something dumb is pretty much the only reason I’m excited for this season. Jameis was made for Hard Knocks. Everything that comes out of his mouth is liable to start and internet firestorm, and the beauty is that he doesn’t know any better. He’s so innocent (allegedly) and means well, but he can’t get out of his own way. He’s like a puppy without a leash, and he’s going to light up the screen.

Similar to the war of attrition between the assistant coaches, all the players want that valuable screentime, too, and the best way to get it is to be super crazy and quirky. Is it forced? Almost always. Is it entertaining? Sometimes. But it’ll happen nonetheless. Luckily for us, the Bucs’ roster isn’t filled with J.J. Watts, so the competition might be that fierce (actually, I have absolutely no idea if that’s valid or not. I can name, like, five Bucs players. For all I know, it might be the biggest collection of hams outside a Smithfield store). Jameis, when he’s not obliviously saying something moronic, will undoubtedly try waaaaaaaaaaay too hard. It’ll be cringeworthy. I think Mike Evans has something going on, but who knows. I think it’ll be Gerald McCoy.

This guy’s so zany. How do I know? Well, he wears oversized glasses all the time! What a wildcard! He’s so quirky and unique! McCoy’s been a great player since he came into the league, but has been relatively anonymous because of where he plays and the fact that he’s eternally tied to Ndamukong Suh since they were drafted in the same year. Look for HBO to try and pump him up as the unknown star who has a crazy personality.

Quickest way to kill some time is to show the viewers that no, these guys aren’t just like us. They have millions of dollars and don’t have to go to work for six months at a time. Someone’s possessions will redefine opulence for the millionth straight year.

The Guy Who Gets Cut

Easily the most recognizable and beloved of the Hard Knocks tropes. Notice someone you’ve never heard of soaking up screentime? Maybe we’ve met his wife and young daughter? Learned about his crippling debt or tough upbringing? Well, he’s getting cut. Sorry.

That’s pretty much all there is to Hard Knocks. It’s not a complex show, and this season may be particularly formulaic. But hey, it’s football.

One thought on “Who’s Ready for Some Hard Knocks?”